Review: Memoirs of the Bathtub Psychic, by Bethanne Elion 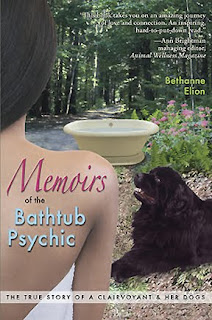 Call it intuition, psychic sensitivity, or just being "tuned in," Bethanne Elion had it. But, like so many of us, she renounced her innate ability to see more than meets the eye, to perceive what was going on energetically around her, and to heed forebodings when they arose, unbidden. The results were painful, and when it came to her beloved Newfoundland, Sophie, even tragic. Memoirs of the Bathtub Psychic is the saga of Bethanne's personal journey to find herself again, and in the process, become the person--the healer, the seer, the gifted empath--she was always meant to be.

As far back as she could remember, Bethanne had a magical connection with animals. "It seemed that the only time I felt at home with my gifts was when I was around animals," she admits. "I intuitively knew they had an understanding of my abilities. She could mentally hear what they were thinking, as clear as day. Fearing ridicule, however, she soon learned how to sabotage her psychic perceptions:

"By immersing myself in my classwork, with music on in the background,
having a few cocktails in the early evening, and leaving the television on
all night while I slept, I could keep the psychic side of me at bay. Noise
helped to stop the clairaudience. Drinking aided in suppressing clairvoyance.
Studying nonstop made it possible for me to avoid deep or meaningful contact
with others. That helped in keeping my soul from wandering off into other
people, animals, or lifetimes."

Bethanne's life changed forever on the day she drove from her home in California to a dog breeder in Oregon, to pick up a seven-week-old Newfoundland puppy, whom she named Sophie. When she brought her precious puppy to get her first shots, she intuitively sensed that something terrible was about to happen, but not trusting herself, she handed Sophie over for the injections. Her big black dog was never the same after that, and within two years, she was dead.

Bethanne subsequently adopted two more Newfies, Emma and Cubby, and when they, too, experienced a series of health problems, she went for help in a different direction. She implemented the nutritional recommendations offered in Wendy Volhard's The Holistic Guide for a Healthy Dog, learned everything she could about homeopathy, and her dogs improved. But when it was time for Emma to have a rabies booster, Bethanne faced it with dread, instinctively understanding that it would be the beginning of the end of Emma. Within weeks after the vaccination, Emma had developed cancerous tumors at the site of the injection. Bethanne knew that in order to save her dogs, and herself, something had to shift. She decided to move to Vermont.

It was in the quiet of rural Vermont that Bethanne began to allow herself to hear again, and to feel again, and it was there that she began to honor her psychic self by making energetic connections with animals in need. She discovered that she could home in on lost dogs and cats, vividly and accurately describing their whereabouts, but sometimes having to tell bereaved owners that their pets were not coming back. She soon learned to dread such cases.

Bethanne learned to ask permission from an animal before initiating a "conversation," and she came to understand how to distinguish the difference between "that which is symbolic and that which is real" in a telepathic interaction. She learned that some animals simply do not want to be found, and that sometimes, there is nothing that can be done to retrieve them.

Bethanne calls herself an "energy translator," explaining that she is simply a conduit for "information funneling in from the universe." What comes through most of all in this honest and sometimes searingly painful Memoir of the Bathtub Psychic is the author's absolute integrity as a searcher, as a selfless caretaker of her creature companions, and as a bona fide intuitive whose ego never gets in the way of the truth. Hers has been a jagged road, but one truly worth following.
Posted by Maureen at 10:14 AM