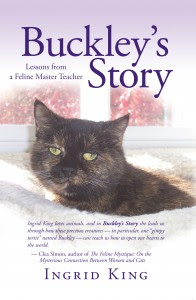 Just by being there, our cats exert a profound influence on our lives.  Yet so many of us fail to appreciate how much they care for and calm us, how necessary they are to our emotional equilibrium, and how integrally they contribute to our inner happiness.

But Ingrid King knows.  And as she movingly details in Buckley's Story: Lessons from a Feline Master Teacher, her poignant memoir of her relationship with a little torti cat with a deformed hind leg and very few teeth, cats can lift us up and make us better for having known them.

Buckley's Story chronicles Ingrid's three-year journey of the heart with her two tortoiseshell girls:  Amber, a steadfast--almost spiritual--cat, and Buckley, an ageless waif whom she initially rescued to be her office companion at the veterinary practice she managed.  Soon, Buckley was running the place herself.

Ingrid started to find it increasingly difficult to leave Buckley at the office on weekends, but she was torn, because though she intuitively understood that Buckley longed to live in a real home, she wasn't sure that Amber would welcome another cat into their close-knit family.  She made two failed attempts to commingle the two cats, but admitted that her own conflicted emotions were interfering with  Amber and Buckley's ability to form a feline friendship.  Finally, though, when Ingrid decided to relinquish her position as the manager of the veterinary hospital to devote herself to writing and to developing her Reiki practice, she realized she couldn't leave Buckley behind.  And sure enough, within a few days, Amber and Buckley worked out their own ground rules, and peacefully shared the same space:

"Cats are sensitive to human emotions.  They often feel our stresses and worries before we acknowledge them.  When I worried about whether Amber and Buckley would ever get along, there was hissing and posturing.  When I finally let go of the fear and worry and simply focused on the desired outcome--all three of us living happily together--the cats' behavior changed."

And, in the process, Ingrid found herself changing, too.  The petite cat who she thought she had rescued was actually saving her:

"The process of bringing Buckley home, with all the emotional ups and downs it brought for me, is ultimately a testament to how much this little cat opened my heart. . .I was set in my ways. . .Buckley's exuberant energy and big heart required me to open myself to change."

As Ingrid plunged into her new careers, Buckley happily settled into her own new roles as "official greeter" and assistant Reiki practitioner:

"She would get up on the Reiki table and often curl up next to or on top of the client.  I realized after a few sessions like this that she intuitively knew where extra energy was needed."

But Buckley's bright light would be extinguished all too soon.  She developed a series of physical problems, which not only challenged her health but also tested Ingrid's ability as a healer.  Her experience at the veterinary practice armed her with the knowledge she needed to get Buckley the best available treatment, but it didn't prepare her to be able to cultivate a sunny outlook.  Only Buckley could do that:

"Buckley taught me how to stay in the moment and not get ahead of myself with worry.  Despite being in considerable pain prior to having her teeth removed, she never spent any time worrying about the upcoming surgery, anesthesia, or recovery. . .I had learned that I could help her more by focusing on her well-being rather than worrying about whether she was going to get better.  It was a constant process of redirecting my thoughts to something positive, whenever the old pattern of worry reared its ugly head."

As Buckley's condition deteriorated, I found myself tiptoeing through the chapters with a sense of foreboding and dread, though Ingrid infuses them with introspection, wisdom, and an unexpected twinge of optimism about her beloved cat's fate:

I felt some of the same emotions as I faced the death of my own dear cat, Casey, whose life on earth ended just two days before Buckley's, in November of 2008.  But I wish I had shown the same grace Ingrid did, as she readied herself to finally let Buckley go.  A year later, as I came to the end of Buckley's Story, I cried for Buckley, for Casey, and for myself.  But not for Ingrid King, who has written a heartfelt gem of a story that will resonate with me, and with anyone who reads it, for a long time.

Great review, thank you so much for this!

Thank you for thhis