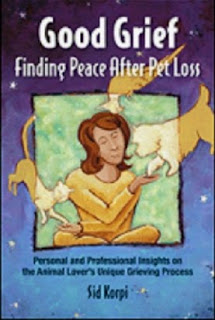 What I liked best about Good Grief: Finding Peace After Pet Loss, is that Sid Korpi approaches her subject with compassion, kindness, empathy, and even a sense of humor. She demystifies this taboo topic, and makes it a lot less scary. If you're mourning the death of a much-loved animal friend, you'll find comfort here.
Posted by Maureen at 11:08 AM

Aside from great books like this, those who suffer from pet loss grief could also go through counseling and join support groups to help them get through this.

It is nice! when my dog died, I don't know where will I go and who do I need to talk to and understand my feelings. It was so devastated after his pet cremation in houston and I loss the best companion. Your post is very helpful. Thank you for posting and sharing this.