Review: Beyond the Homestretch, by Lynn Reardon 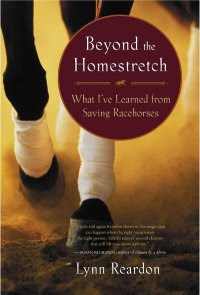 In 2008, more than 134,000 hapless horses of every age and breed were crammed into overcrowded trucks from various points in the U.S. to take a one-way ride to oblivion, via slaughterhouses in Canada and Mexico. The trend continued this year, though the final tally of equine lives lost in 2009 is not yet available.


The scope of the problem is daunting to anyone who loves horses and wants them to be treated with dignity, not put in harm's way. Yet what can one person do to make a dent in the carnage? In Beyond the Homestretch: What I've Learned from Saving Racehorses, Lynn Reardon has the answer. You do the only thing you can do: you save them one at a time.

Lynn experienced the horrors of the horse slaughter pipeline first-hand when she was living in the Washington, DC area, working as a finance manager and spending all of her free time learning how to become a proficient rider. It was during the early 2000s, when slaughter was still legal in the U.S. Attending an auction with Tina, a trainer seeking a horse for a client, Lynn happened upon an old paint mare, wedged into a pen with her son and several other horses:

"Her face was incredibly sweet with large, dark eyes full of warmth and trusting cheerfulness. I halted, arrested by the humanity of her gaze. . .The mare took a couple steps closer to us, looking for attention, her gait clumsy. I looked at her ankles and a chill tightened my throat. Even my novice eyes could see the arthritis and large bony spurs around each joint. She could barely walk--a death sentence.

Tina pulled me away, muttering, 'That mare's only heading one place and not for a lot of money. She's earned a better end than that.' I glanced at the mare again--her Da Vinci expression still haunts me today. A meat dealer bought her, a squat, sunburned man with eyes like concrete. That was the last auction I ever attended."

In chronicling her experiences as the fledgling founder of LOPE (LoneStar Outreach to Place Ex-Racers), which helps to find new careers for thoroughbreds whose racing days are over, Lynn vividly describes the physical and emotional challenges she's had to overcome to ensure that at least some of the horses retiring from Texas racetracks don't meet the same fate as the gentle mare she met so many years ago. And it's her gut-wrenching skill with words that makes us care so passionately about what happens to the ones who have been lucky enough to reach the safety of her ranch.

Many of the thoroughbreds who arrive at LOPE come with gossipy backstretch "rap sheets," suggesting that they are mean, or stubborn, or high-strung, or even untrainable. Lynn quietly smashes these stereotypes, in sometimes surprising ways. Her gift is to listen only to what she hears from each horse's heart, and to compassionately and creatively give them the space they need to shine.

My favorite (and perhaps Lynn's, too) is the aptly named, "Sugarfoot," an angel of a filly blessed with a "mellow disposition and willing attitude," but questionable conformation. Because of her sweet demeanor, Lynn was sure she'd find a new home quickly. But each prospective adopter found some reason to reject her, and it looked like Sugarfoot might take up permanent residence in Lynn's backyard. Everything changed on the day that a developmentally disabled young woman named Desiree arrived to meet her. Without ever having been trained to do so, Sugarfoot immediately understood how to take care of Desiree, and make sure she wouldn't lose her balance:

"It was clear that Sugarfoot was protecting Desiree, that this little red filly with the funny build had a true, deep vocation to be a therapeutic riding horse. Awed, we watched as Desiree and Sugarfoot walked together, with Sugarfoot always listening, always careful to keep her steps slow for her special rider."

Along the way, Lynn has found herself unexpectedly but earnestly assisting at tracheotomies, treating rattlesnake bites, and constructing tricky hock bandages. She confronts her own doubts and deficiencies with self-deprecating humor and honest introspection, often coming across as her own harshest critic, always wondering whether she is up to the task:

"I had developed an interesting skill set, like how to feed fifteen horses from my truck and the proper technique for tracheotomy assisting--but these were the badges of an equine social worker, not a true professional equestrian."

But Lynn Reardon doesn't have anything to apologize for. The herculean dedication required to sustain an equine rescue cannot be overstated, yet Lynn has carried each horse to the finish line with grace and equanimity. She's been instrumental in saving the lives of more than 700 thoroughbreds, and in Beyond the Homestretch, she's written a compelling memoir of her own redemption. I eagerly await the next chapter.