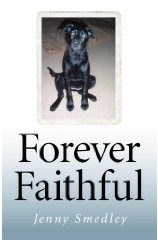 In Forever Faithful: Dogs That Return, author Jenny Smedley achieves something that many people would think to be impossible: she presents convincing evidence that dogs (and other animals) can come back into our lives after they have died, reincarnated in the bodies of other creatures who somehow manage to find us, so that we can resume our souls' journey together.

Even the most skeptical reader will have to admit that Ms. Smedley's story of her own experience with the death and rebirth of her beloved dog is built on more than just mere coincidence.

I was immediately sucked into Jenny's account of Ace, the mixed-breed black puppy who frantically escaped from a home in which she had been cruelly mistreated, on the day that her owner deliberately scalded her with steaming hot water. Of course, Jenny wasn't actually present as an observer of these events, but she intuited what had happened, from Ace's perspective, and the details feel just right.

After a few weeks of surviving on her wits, and on scraps from kind strangers, the injured puppy collapsed on a beach, where she was gently scooped up by a big-hearted woman named Maggie, who worked at the local Animal Rescue Centre. Having been physically restored by a month of recuperative care, the scarred and still-scared puppy was ultimately adopted by Jenny and her husband, Tony, who had recently lost their sweet dog, Snoopy. It was love at first sight.

"The pup and I locked eyes, and then, with no excitement or fuss at all, she left Maggie's side, and pulling the lead out to its full length, she walked to me, then turned around and sat down beside me, her shoulder against my leg. I was breathless. I felt tears welling in my eyes, and I could see them in Maggie's too. 'Well,' I said, smiling, 'that seems to be that.'"

They called the puppy, "Ace," and, because of the way in which she had instantly bonded with Jenny, they had to wonder whether Ace might actually be Snoopy. Whether that was true or not, Ace had a nobility of spirit and a way of connecting with people that made Jenny realize that she was truly an "advanced soul." Ace literally saved Jenny's life when an out-of-control ram was about to gorge her with his horns, and she miraculously survived a bout with a malignant mammary tumor, in spite of the veterinarian's dire prognosis.

When, after 15 years, Ace's body gave out, and her quality of life deteriorated, Jenny forced herself to make the decision we all dread: to gently cause Ace to leave her physical body with the help of an injection. Jenny was inconsolable for weeks thereafter.

"Some dogs are such a great part of our lives that their demise drops us into despair. I just didn't know how to cope with my loss. She'd been my best friend, an animal soul mate, and I couldn't face life without her. I felt guilty. I felt as though I had killed my darling Puppy, even though I knew that given a real choice I would never have taken that decision."

Some months later, Jenny and Tony went to Sedona, Arizona, where, on September 13th of that year, Jenny had a consultation with a clairvoyant named Claudia Coronado, who told her that she had a message from "your dog," describing a big black dog with white whiskers: Ace!

Claudia calmly told Jenny that the black dog wanted her to know that "you two are united through all time and space." And, stressing the importance of what she was about to share, Claudia relayed Ace's main message, "Today I am young again.

Jenny was appreciative of the fact that Ace had come through during the reading, but didn't realize the significance of her dogs words until many weekslater, after she had returned home, and found an ad in the paper for some Lab/Springer mix puppies.

She initially discarded the ad, but mysteriously, it popped up again on the coffee table several days later. Jenny decided to call to ask about the puppies, and was stunned to learn that they had been born on September 13th, which she instantly recognized as the day that the psychic had said that Ace was "young again." She knew then that she had to meet these black puppies, who had been born on a nearby farm.

When Jenny and Tony arrived, six of the seven puppies were wriggling and writhing and whining and rough-housing. But one was decidedly different:

"One puppy didn't do any of that. She sat, poised and elegant, to one side, quietly aloof and waiting for the melee to clear. When things calmed down, the farmer opened the french doors onto the garden and the swarm of pups shot outside like a black and white tide, for a play, but this one coal black puppy didn't follow them. She finally got up and walked over to me. We regarded each other. She was extremely quiet for a puppy. No jumping, no squeaking, just a calm regard. She clambered onto my knees and settled herself there. She gazed up into my face, making complete and unabased eye contact. Tony crouched down beside me and she casually flicked a paw onto his arm, as if to say, 'Hi, I've been waiting for you.' looking directly into his eyes just as easily as she had mine."

Jenny thought that the puppy's demeanor was rather remarkable, but it wasn't until the little dog rolled over on her back that she knew for sure what her heart had been trying to tell her. This puppy was missing a nipple, and it was the same one that Ace had lost when she'd had her mammary tumor excised. There could now be no doubt. Ace had returned!

The new puppy, named "KC," has taught Jenny that reincarnated animals are both the same, and yet distinctly different, from their previous selves, and she has also shared many other wondrous lessons about the nature of life, death, and the way in which a spirit endures and evolves.

If you have ever experienced the magic of a dear animal's reincarnation, or if you long to be reunited with one you have lost, Forever Faithful: Dogs That Return will provide solace, consolation, understanding, and most of all, hope.

My interview with Jenny Smedley will be published in this space tomorrow. Jenny's latest book, Pets Have Souls Too, has just been published by Hay House.